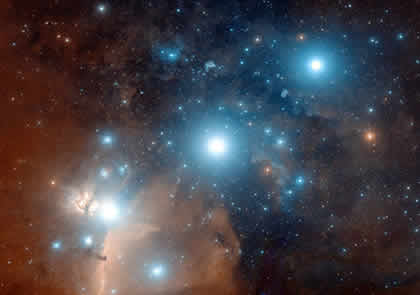 The Quechua name of the constellation Orion is Kinsa Ch'ata. Like many other advanced civilizations with extensive star knowledge, the Incan people hold Orion as a constellation of extreme importance. There are three stars in the Belt of Orion and for the Incan shamans, these stars directly relate to the three worlds they work with when they journey. In fact, within the Inca cosmology, all of life is made up of these three worlds. They consist of the Upper World (Hanaq Pacha), the Middle World (Kay Pacha) and the Under World (Ukhu Pacha). These worlds have many layers and chambers where Incan shamans go for healing and to bring back sacred knowledge. Thus the Initiation of Orion connects you not only to Orion, but also to the three worlds of Incan shamanic journeying.

Another name for the Orion Star Initiation is called the Initiation of Your Inner Star. Also, Orion is sometimes referred to as the Three Mary's. Throughout the world, the Belt of Orion is extremely significant and profound. In Ancient Egypt, it was the home of departed souls. Orion was believed to emit spiritual rays of light that "vivify gods, men, cattle, and creeping things, out of the seed of the soul," (Harper) It is not surprising that the resting place and, as well as origin of the ancestors could be seen as Orion because the Orion Nebula is considered the birthplace of our solar system. The three pyramids of Giza in Egypt, in fact, were created to mirror Orion in the night sky. They were not the only ones, sacred ceremonial monuments and pyramids all over the world were built to line up with Orion!

The stars of Orion, in fact, offer numerous blessings and are referred to by the Incas as chaskas, big stars. They carry or transmit the energy of the sacred family (mother, child, and father). Their light activates more clarity and insight by opening your subconscious and they are directly related to the third eye. The blessings of Orion are also deeply healing and grounding. They are bright healer stars for people and also for Pachamama and the all inhabitants of earth. Further, they bless you with protection on your path. To connect with them will give you added protection in life, when you need it.

A vital aspect of Orion is that it is linked with new beginnings. This is associated to the timing of its rising in the Southern Hemisphere on the Summer Solstice and in the Northern Hemisphere, at the Winter Solstice. This is interrelated with the Incan constellation of the ancestors, the Pleiades. The timing of their ascension in the night sky is synchronized. These are sacred times are occasions when shamans can receive the blessings of the light of these constellations (both Orion and the Pleiades). Therefore, the blessing of Orion itself is an initiation into a new life, a rebirthing. In the prophetic words of Lou Famoso, a man who came back from a near death experience with sacred information from archangel Gabriel, "Look to Orion and you will know when the new world will come." The significance of Orion cannot be underestimated and has been recognized throughout the world, over time.

If you are interested in receiving the Orion Star Initiation, Kinsa Ch'ata, please contact us. These initiations can be done long distance, but are more powerful when received in person.

Path of the Energetic Mystic: Explore the Essence of Your Heart. Inge Teunissen, Dennis Alejo, Mango translations from the oral teaching of the Inca Q'ero paqos: Trophonios Publishing, 2013

Personal trainings with the Inca Q'ero paqos (Dona Ernestina and Don Lorenzo) through oral teachings and the Orion initiation during their visit to Holland, Spring 2014.